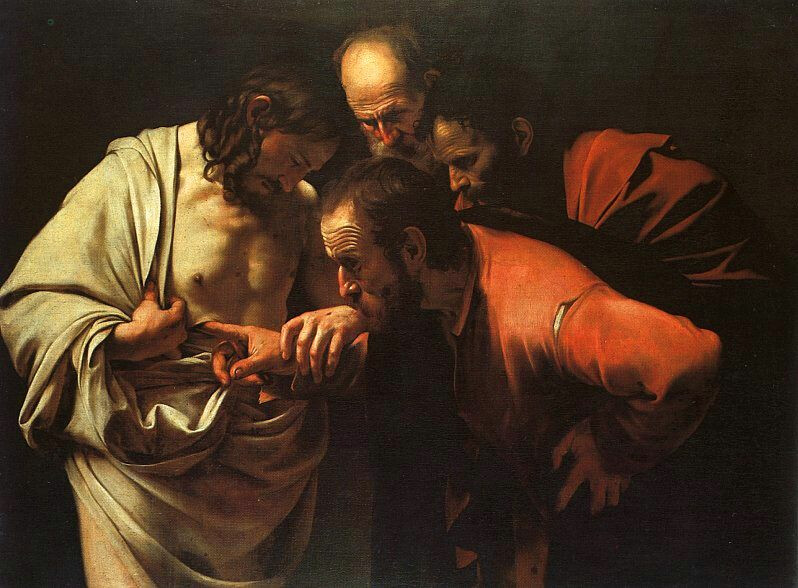 We know the account of St. Thomas. Jesus appeared to the 10 apostles in the upper room and preached peace to them. They saw Jesus and told Thomas about it. Thomas did not reply in great faith, but out of weakness said, "Unless I see in his hands the mark of the nails, and place my finger into the mark of the nails, and place my hand into his side, I will never believe.” (John 20:25).  Because of this, we lovingly call Thomas, Doubting Thomas today. Even when people have a hard time believing what we are saying, be it about Jesus or anything else they themselves did not witness, we call them a Doubting Thomas. Doubt is a reality of the fall into sin, a weak faith that is overcome by the cares and worries of this world.

Some people doubt because of skepticism that they say flows from a rationalistic mind. However, many of us doubt because we allow our experiences to overcome the Words and promises of Jesus. In this time with the uncertainty of the Virus, many faithful Christians are having moments of faithlessness. Many Christians are not strong in their Christian faith right now because their hearts are overcome with fear, anxiety, worry, and insecurity. There are many of us who are living like Doubting Thomas right now, as if we will not be better unless Jesus rends the heavens open and comes down physically to comfort us and assure us that everything is going to be alright.

Did Jesus not do this for Thomas. Remember the rest of the account which says, "Eight days later, his disciples were inside again, and Thomas was with them. Although the doors were locked, Jesus came and stood among them and said, “Peace be with you.” 27 Then he said to Thomas, “Put your finger here, and see my hands; and put out your hand, and place it in my side. Do not disbelieve, but  believe.” 28 Thomas answered him, “My Lord and my God!” 29 Jesus said to him, “Have you believed because you have seen me? Blessed are those who have not seen and yet have believed.” (John 20:26-29).  Jesus did not barge into the room and condemn Thomas for his doubt. Jesus did not call Thomas out and tell him that he is unworthy to be an apostle and must now leave the assembly. No, rather Jesus told him to put his finger in His hands and his hand in His side and stop disbelieving, and instead believe. Jesus preached belief into Thomas' heart that overcome his doubt. Thomas then confessed the faith until His death by martyrdom by being speared to death. Jesus came to Thomas in the midst of his doubt and forgave him his sin. Jesus died on the cross for Doubting Thomas so that he could be known in heaven and on earth as St. Thomas.

Jesus died on the cross for Thomas's doubt, and He died on the cross for yours as well. Jesus, on the cross, became the sin of the world, which means that, when the law found Him, the law did not find the sinless Son of God, but Doubting Thomas. On the cross, the law found Jesus to be Thomas' doubt, and yours as well. The Father saw this and drained His wrath against Thomas and all of us there on the cross, on His Son. Jesus consumed all the wrath of His Father against our doubt, our weak faith, and our faithless moments. Jesus consumed it all, so that now He may forgive it all. All authority is Jesus' and He has the authority to either condemn us for our sins, or to absolve us of them. Jesus is not a wrathful deity, but our merciful Lord who died on the cross for us so that He can forgive us all our sins. When we are faithless, He remains faithful, for He cannot deny Himself. He died for all our sins on the cross, which includes those times when our faith is weak or absent. Jesus died on the cross so that He may comes to us now in the means of grace and forgive us all our sins.

Blessed are those who have not seen, and yet have believed. This is us. We do not see the physical Jesus as He was on the cross, or in His resurrected body. Rather, we see Jesus hidden in the means of water, bread, wine, and sinful mouths. Jesus comes to us, in the same way that He came to Thomas, in the means of grace, not to condemn us, but to forgive us and comfort us in our identity as His beloved. Jesus comes to us to forgive us in Baptism, the Sacrament of the Altar, the Gospel preached, Holy Absolution, and the mutual consolation of the brethren. May the Holy Spirit bestow on us His grace, that Jesus may continue to come to us in the means that grant us forgiveness, life, and salvation.

Peace be with you. May the devil be silenced, the world be hushed, and the Old Adam be drowned anew so that you may hear the peaceful voice of your Savior Jesus who says, "I love you. I forgive you. I claim you as My own forever," Amen.